What To Expect from Ear Tubes

What to Expect from Ear Tubes

It’s been a tough year for our daughter, Emmy. We’ve come to be known by first name at her pediatricians office and our pharmacy. In less than 1 year, she has had 8 ear infections.

Her ear infections started becoming an issue around 19 months. She was breastfed for a full year and never even had a sick visit to her pediatrician until a year and a half of age.

After that first ear infection, they came back to back for what seemed like months, totaling to 5 in just 4 months. We had a three-month infection hiatus and we were hopefully it was all behind us and we would avoid tubes. But they soon returned and we had three back to back again and we knew it was time for tubes.

I’d be lying if I said we were not relieved when her pediatrician finally gave us the referral to take the next step towards getting long-term relief for our daughter. The constant infections had interfered with so much, including her being able to sleep well. The constant antibiotics were a big upset to her tummy. We were so ready to get her to a healthy status!

Once we received the referral from the pediatrician, we immediately made the appointment with the ENT. Considering Emmy had not made it more than 2-3 weeks without an ear infection over the past few months, we were hoping to have the procedure done before another infection could strike.

Our ENT appointment started with a hearing test which told us Emmy’s hearing was not exactly where it should. She scored a B for her left ear and a C for her right ear. We knew this was caused by the constant fluid she had in her ears.

We then saw the ENT who asked us a long series of questions regarding Emmy’s history and checked her ears. The day of the appointment was the final day of Emmy’s latest round of antibiotics. When the doctor checked her ears he saw fluid behind both ears and both ear drums were a dull, grey color. Meaning after 10 days of antibiotics, they still were not healthy. At that point he determined she was absolutely a candidate for tubes and we scheduled the surgery for 10 days later.

Our Pre-op appointment was scheduled for 6 days before the surgery. This was by far the most informative appointment we had. It was nice to be able to leave the appointment where we determined Emmy qualified for tubes, go home to do research and write down questions then have an entire appointment dedicated to walking through everything. The pre-op appointment was jam-packed with tips and advice for procedure day (more details on those below!) We were also given a prescription for antibiotic ear drops that would be administered for 7 days after her procedure.

We did a few things to make Emmy comfortable for the day of her procedure. We made sure she was in warm and comfy pajamas the night before she went to bed so that we could go straight to the surgical center bright and early. We also packed a lunch bag with a few of her favorite snacks and sippy cup but made sure to keep it completely out of sight from Emmy, considering she would not be able to eat or drink before the procedure. We made sure to fill her ear drop prescription a few days prior to the procedure so we didn’t have to make a run to the pharmacy with a groggy baby.

The facility that performed Emmy’s procedure took patients in by age, meaning we were lucky to be one of the first ones checked in. Her procedure was scheduled for 8 AM meaning we needed to be there at 7 AM to prepare. I was very nervous about Emmy asking for milk or breakfast when we woke up but with how early it was, she never mentioned it.

Upon arrival, we had minimal paperwork to fill out before we were taken back. Emmy was able to keep on her pajama pants but did need to put on a hospital gown top. Luckily, the preparations to take her back were minimal; just a quick check of her temperature and a pulse-ox readers taped to her toe. From there, Emmy took a small amount of medicine to help her relax. 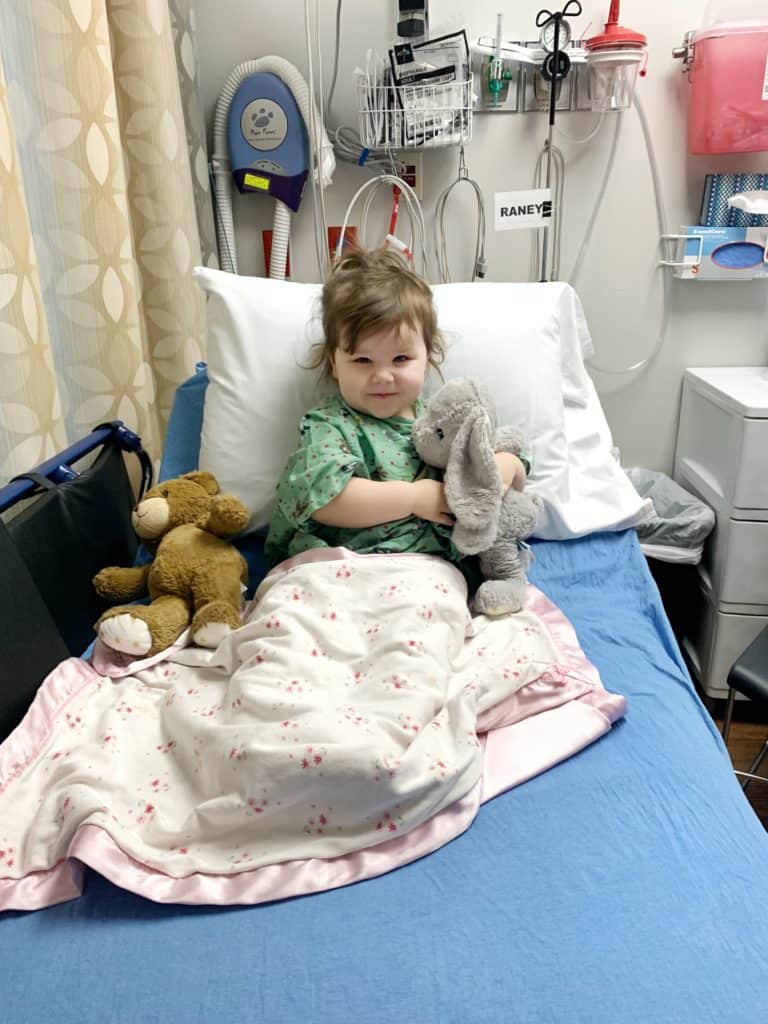 We sat and waited for about 20 minutes for the medicine to take full effect. During that time, a distraction was much needed! We read a book and then played on the iPad, which is a huge treat for Emmy. We told Emmy that morning that she could bring along her favorite comfort item. We couldn’t pick just one so her bear, bunny, and blanket  all came with us.

The doctor and nurse both walked us through what would happen once Emmy was taken back. She would be gently put to sleep with gas while sitting on a nurses lap. They would then begin the procedure and check her adenoids.

Due to Emmy’s age, her adenoids tissue was a concern. The doctor believed it would be the culprit when it came to her persistent ear infections. Shortly after she went back, we were notified that her adenoids were taking up more than 70% of her nasal cavity! The doctor said he removes anything more than 30% so the removal was definitely necessary.

The procedure lasted a total of 15 minutes (it would have been a little less without adenoid removal). We were called back and the doctor gave us the full run down of how the procedure went. We were shocked to find out that her ears were yet AGAIN infected. The doctor let us know we might see some drainage due to the infections but the drops would fight it.

Coming Off of Anesthesia

When it came to the day of the procedure, coming off of anesthesia was the hardest part for Emmy. She was very frustrated as she woke up and hard to console. She was pulling at her monitoring wires and trying to climb out of bed.  No matter what we offered her, it did not help. A nurse suggested her dad climb into the hospital bed with her and bear hug her. IT WORKED! It calmed her down so much that she ended up falling right back asleep in his arms!

When she woke up again about 20 minutes later, she was still fussy, but much less so. We were able to get her to drink water with her favorite cup and distract her with a mini photo album we had put together. We filled in with pictures of her at the Zoo, swimming with her cousins and doing fun crafts. She was explaining every picture to us through her slight crying and it was the perfect little gift to calm her down.

Shortly after a final check of vitals, we were sent home. From the time we were called back to see her to driving away from the center was just over one hour.

Emmy’s fussiness gradual went away throughout the day. She took about a 2.5 hour nap shortly after we arrived home and was back to her normal self when she woke up. She ate and drank as normal from the time she arrived home.

By the next day, it was like nothing ever happened! We saw such a change in Emmy for the better. She slept so much better. She was overall just in a better mood! We knew she was finally feeling relief and we knew we made the right move by doing the ear tubes.

Administering Emmy’s ear drops was a challenge. Emmy complained that the drops felt funny and were loud in her ear (all totally normal, it was just a strange sensation for her). By the 7th day I was ecstatic to have the task behind us. Overall, this was the hardest part of our ear tube journey.

Two weeks after the procedure, we returned back to the ENT for a follow up. A second hearing test showed that Emmy hearing had improved; she scored an A in both ears!

Overall, we were so pleased with the results and the amazing doctors and nurses who provided us with such helpful information to make the entire process smooth for both Emmy and mom and dad!

P.S.- As I write this, my youngest daughter Nora is currently suffering from her 4th ear infection in 3 months. We may soon be doing tubes with her as well!

Tips from Doctor and Nurses

-Because Emmy had her adenoid tissue removed, it was suggested to put a humidifier in Emmy’s room to help keep the air moist.

-Both the doctor and pharmacist recommended holding the bottle of ear drops in hand for a minute or two to warm them up. Cold drops do not feel good in the ear!

-I was very concerned that the adenoid removal would meal a modified meals for Emmy similar to tonsil removal but it did not. The doctor told me that the wound was far enough up her nasal cavity that food and drink would not come in contact.

-As I mentioned earlier, the photo album was a great distraction for Emmy while coming off of anesthesia. Pick something your child really loves and take it with you to give to them after the procedure. A good distraction was a game changer!

Swaddles n' Bottles is a participant in the Amazon Services LLC Associates Program, an affiliate advertising program designed to provide a means for sites to earn advertising fees by advertising and linking to Amazon.com. This program does not effect the price a customer pays for products. To read more on affiliate links, please view our privacy and disclosure page.