Big disclaimer for our story: I am not a doctor and cannot suggest you use any of the methods or products listed in this post. Information shared is not intended as medical advice.  If you are concerned with your child’s head shape, consult with a physician.

**There is an updated post with photos of Emmy’s head at 22 months at the bottom of this page!

I’ll never forget the moment that the scan of my child’s head popped up on the screen. HOW had I not noticed how flat it was? And it wasn’t only flat, it was kind of crooked.

The mom guilt started to wash over me instantly.

The pediatric therapist who had taken the images of Emmy’s head asked if I had noticed her favoring one side of her head while sleeping. Um, no? Well maybe? I couldn’t be sure.  I mean I had watched her sleep so many nights, how had I not noticed something like this?

Turns out that Emmy had a tightness in her neck that caused her to favor facing her left side while snoozing. This caused her brain to grow through the path of least resistance, resulting in a sort of bulge on the right side of her head.

The photo below compares a normal babies head shape to Emmy’s head.

The pictures spoke for themselves. Something had to be done to help our sweet girl.

It was recommended that Emmy be placed in a Doc Band, aka, a baby helmet. The band would be worn for a minimum of 6 weeks and a maximum of 3 months. We contacted our insurance company to see what our out-of-pocket cost would be… a whopping $2,800! The good news was the cost would go towards our deductible. Bad news- there was only a month and a half-ish left in the year!

While we were willing to do what we needed to for Emmy, we also didn’t want to be rash with our spending. We consulted with the PT and asked if waiting until the first of the year to start Emmy in her band would be a bad idea. He advised us that an additional time would not cause great harm, but he suggested we do some exercises to help Emmy in the mean time.

I left the doctor’s office that day with a list of instructions on how to help Emmy get straightened out. I was a mama on a mission!

Before the suggestion to put Emmy in a helmet, we did about 20 minutes of tummy time a day. I had assumed this was enough. When I asked her the PT who completed her scan  how much we should be doing moving forward he responded with “25 hours a day is too much”.

So from there on out, almost every minute that Emmy was not sleeping or nursing was spent on her tummy. Like alot of babies, Emmy was not a fan of just plain old tummy time on the floor. Her PT had advised that any position where Emmy’s head was going against gravity would be beneficial to her. So any time at home was spent rotating between a few different “tummy stations”.

I would set her up on the boppy pillow with a books and toys close by.  When that got boring I would move her to where she was laying on her tummy on top of my chest and we would make silly faces at each other. I would also cross my legs and lay her across them while we read a book. I would carry her around the house superman style.

We were constantly moving from room to room to keep things interesting. Tummy time outside on a blanket was a huge hit and she could usually do that for 20 minutes straight! We also started using this water mat which was just fascinating for Emmers. Mirrors like the one below are also a great way to keep a cranky tummy time baby occupied: 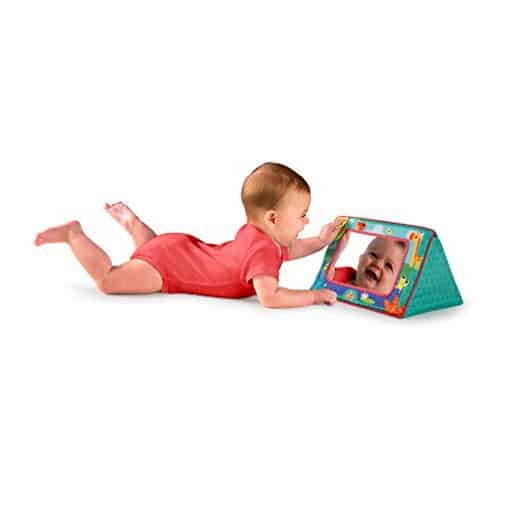 Emmy never spent another minute in her baby swing. We had previously been using a travel system for her stroller but switched to one that she could sit up in if we were on the go versus laying in her car seat.

We made an effort to make sure every minute was beneficial to her head.

Her muscles did need a break every now and then and that is when we would move to neck stretches. But besides that, it was tummy time all day, every day.

The tightness in Emmy’s neck the caused her to favor one side needed to be loosened. Luckily for Emmy, this was easily done during play time or by mom and dad holding her. The play time stretch: I would lay Emmy on her back and place her favorite toy on the right side of her body. I would sit on her right side too to keep her neck stretched in that direction. We would play like this for 15 minutes or so before rolling over and going back to tummy time. This was done multiple times a day. 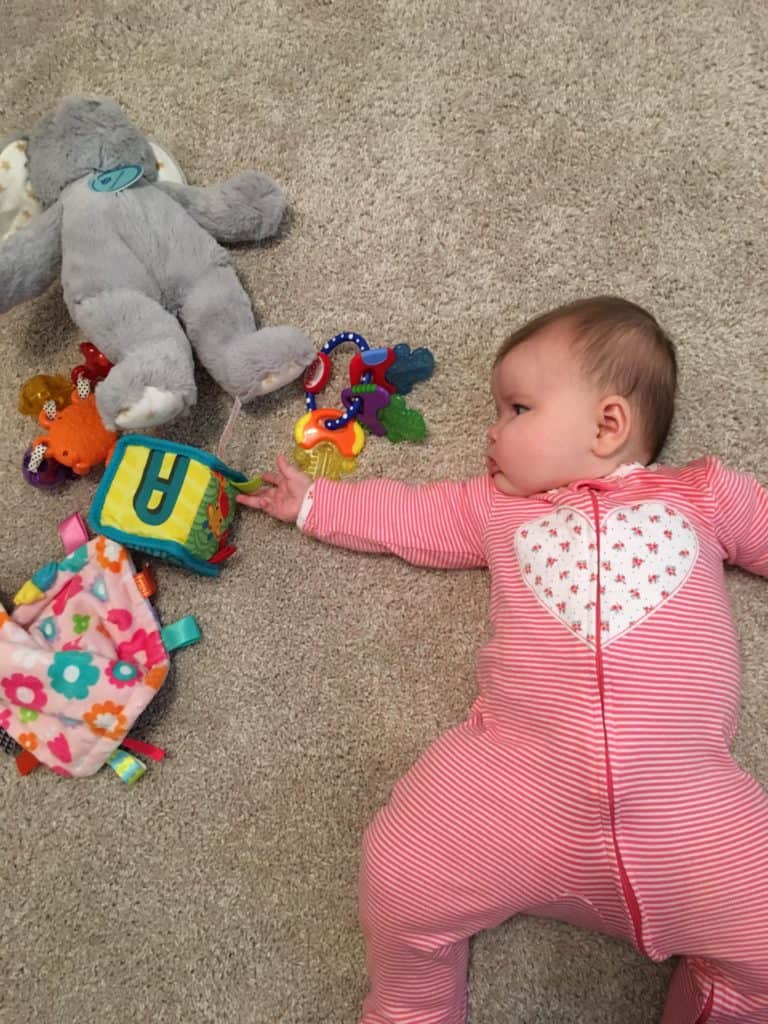 The Football Hold: We were able to hold Emmy a certain way that would really get her neck muscles stretched out. Unfortunately I do not have a photo of me doing this with Emmy, but I do have this wonderful example photo the doctor provided me with. I will say that this one takes practice. Jay and I would take turns holding Emmy while the other one looked at this picture to make sure it was being done correctly. We would do this one a few times a day, but it was the least performed exercise over the month and a half.

I did alot of research in the days after seeing Emmy’s scan on products we could purchase to help her. I read countless reviews and looked through a ton of before and after photos. We ended up purchasing a Merry Shop Head Shaping Pillow.

Now before anyone freaks out that I put a pillow in my child’s bed, let me give you some facts. Emmy was 5 months old when we began using this product. She had yet to roll over and she hardly even moves once she hits the mattress. If she was a busy body type sleeper, I would probably have decided against this product. Second, the pillow is made from a heavy memory foam type material that caused it to stay put pretty well.  We took the pillow with us on long car rides, on vacations, basically every where that Emmy would be sleeping.

An alternative that Emmy’s pediatrician recommended was taking a roll of foam like this one and cutting a small area to go under her crib sheet where she lays her head. He suggested to put the bumpy side down and this would help correct her flatness.

About 2 months after we began using the pillow, Emmy started throwing it from behind her head at some point in the night. We were worried she could start to have some flatness again so we ordered a DockATot. While a DockATot is technically designed to help baby sleep better, it does have a lot of benefits to help with plagiocephaly.

With the DockATot, the area where a baby’s head rests is on a slight incline and not touching the mattress. It basically creates a little hammock for their head where there is no pressure and the head can take and hold its proper shape.

While the DockATot is a bit pricey, it was still much cheaper than a helmet. We ordered the Grande version which can stay with a baby until they are three years old. You can see the buying options here.

As soon as the New Year began, we scheduled a 6 month check up appointment for Emmy. The doctor examined her head and told us a helmet was not necessary. I almost cried tears to joy! He advised us that her head still had a mild flat spot, but nowhere near severe enough to need correction through the Doc Band. He advised we continue our efforts we had been making over the past month in order to make sure we stayed on the path towards a round little baby head.

Is a helmet right for your child?

If your baby has been recommended for a Doc Band or another form of baby helmet, know that so many other moms are in your same position! in 1994, the Back Is Best campaign was launched by the US National Institute of Child Health and Human Development (NICHD) at the US National Institutes of Health. Before this time, it was common for mothers to place babies on their stomach to sleep in order to prevent choking on spit up. Since the campaign, there has been a HUGE increase in the baby helmets.

There is still alot of debate on the subject and whether or they are completely necessary. Some argue that it is strictly cosmetic, while the doctors who prescribe the bands usually cite scary issues such as jaw and nasal complications as the child grows.

I know many people whose children have been in or are currently in a Doc Band. I also know many mothers who were told it was needed and went completely against the decision and their kids are still cute as can be. That’s the hard part about being a mom. The decision is yours to make for your family.

We decided we would do the helmet but at a time that made sense financially for our family. In the mean time we did what the doctors suggested and the results were more than we could have ever imagined! So if you are here searching for an answer on what do to about fixin’ your kids flat, I don’t have one for you. Know that I, like many other mother in this situation, spent many nights lying awake wondering what to do. The decision you make for your child will be the right one.

UPDATE: due to the amount of emails I receive about this topic, I have written an update on Emmy’s head shape! You can read the post here or by clicking the photo below.